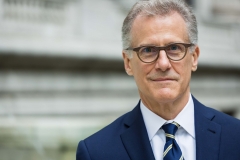 Supreme Court of the United States

Usher is the head of WSMB’s dispute resolution practice group. With decades of trial, alternative dispute resolution, and appellate experience, Usher has been involved in some of the highest profile civil cases in recent years, including a case involving what CNBC called “[t]he biggest art fraud in modern U.S. history”; the multi-district litigation regarding the alleged manipulation of LIBOR (In Re: Libor-Based Financial Instruments Antitrust Litigation, 1:11-md-02262-NRB); landmark securities cases arising out of the 2008 financial crisis (such as U.S. Securities and Exchange Commission v. Stoker, 11-cv-7388); and several headline-grabbing cases related to the Academy Award winning Best Picture Birdman – to name a few. During the course of his career, Usher has counseled individuals and businesses of all types and sizes, as both in-house and outside counsel. Moreover, he has served as an arbitrator and mediator for more than 20 years and brings that experience to his dispute-resolution skill-set (click here for more details). In addition, he has held senior executive positions in multiple companies, so he understands the client-perspective on litigation first-hand.

Usher began his legal career as a commercial litigator at Thacher Proffitt & Wood, where he represented large financial institutions and insurance companies. When he moved to the business side, Usher served as CEO of Odin Media (a producer of technology-enabled marketing solutions for companies like Comcast and Cablevision), as COO of Digital Club Network (a groundbreaking start-up that pioneered using digital and Internet technologies to record and webcast live concert performances), and as principal, EVP, and general counsel of Razor & Tie Entertainment (a multi-faceted media company that includes a record label with multiple Gold and Platinum releases).

In 2008, Usher co-founded WSMB and returned to his career-roots as a commercial litigator. Under Usher’s leadership, WSMB has built a world-class litigation group, which regularly handles everything from bet-the-company cases for large institutions to routine disputes for individuals and small businesses. Usher graduated with honors from Washington & Lee University and NYU School of Law and has served on the Washington & Lee University Alumni Board of Directors.